In the heart of the historical city centre, within the walls of the castle, the mighty Cathedral dominates the square. It was designed by Francesco Maria Preti in 1723 at the very young age of 23, replacing a pre-existing Romanesque church. The facade was added only in 1892-1893, based on the drawings of the engineer from Castelfranco, Pio Finazzi.

The church is not only the first work of Preti, but also the highest and most summarizing example of his vast design production, in which all his architectural theories are expressed. Later, they will be reproduced in other churches of the area (Vallà, Salvatronda, Caselle d'Altivole, Tombolo), in the Academic Theatre of Castelfranco and in the Venetian villas: Villa Pisani in Stra and and Villa Corner in Cavasagra di Vedelago.

Preti takes the Palladian Church of Redentore in Venice and the Venetian Church of the Gesuati as a model. Inside the new temple, the architect applies his theories: first of all the proportional harmonic mean, so that the height of the single bright nave is harmonic average between its length and width. In the central section there are three chapels on each side, connected to each other and raised by three steps. The entire interior perimeter is surrounded by the Ionic architectural order, richly decorated. The construction of the new Cathedral not only involved the demolition of a section of the city walls, but also the demolition of the ancient Romanesque church, a shrine of historical city memories, irreparably lost along with the original Costanzo chapel.

Besides the Altarpiece by Giorgione, the Cathedral houses several works of art. Among the others: the Choir altarpiece, with the Descent of Christ into Limbo by Giovanni Battista Ponchini, an assistant of Veronese. On the right side, the Martyrdom of St. Sebastian by Palma il Giovane; on the side altars, the altarpieces with the Homage of the Doge Pietro Orseolo to St. Mark, by the artist from Castelfranco Paolo Piazza and the Marriage of Gioacchino and Anna by Francesco Beccaruzzi. In the side vestibules: the seventeenth-century frescoes taken from the church of the suppressed convent of the Riformati (in Borgo Treviso), depicting St. Bonaventura and St. Anthony the Abbot, by Orazio del Paradiso; the altar of the Assumption (west apse of the transept) by the sculptor Giuseppe Bernardi called Torretto.

The Cathedral can be visited free of charge. 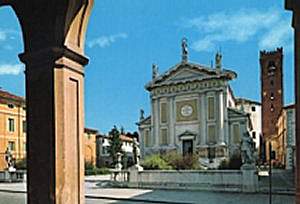 Opening Hours Visits during liturgical rites are not allowed.