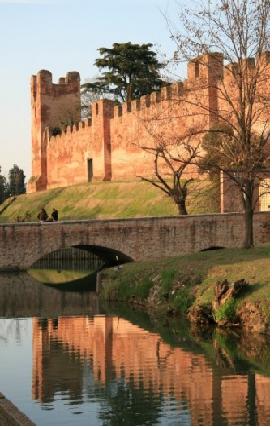 The origin of the name of Castelfranco Veneto is the “franco” castle, free from tax for its first defending inhabitants.  The mighty city wall of red bricks was built on a preexisting earthwork between the end of the 12th and the beginning of the 13th century, by the medieval Municipality of Treviso. It was the garrison of the border with the domains of Padua and Vicenza.

The city wall is well preserved, as the towers at the four corners and at the midpoints. It is 17 metres high and around 230 metres long on each side. The government of Ezzelino III da Romano in the 13th century, the Venetian domain, the short domain of Carraresi - you can still see their family coat of a four-wheeled wagon under the vault of the Civic Tower, the war of Cambrai: all these historical events left their marks in Castelfranco. Fortunately, the Castle was not demolished in the 19th century and today is the symbol of the town.

Castelfranco is a commercial city since its origin and it is inextricably linked to the history and strategic position in the centre of the Veneto Region, compulsory stop among Venice, Germany and Flanders, and between Western Europe and the Eastern World. Scientists (Jacopo, Giordano e Vincenzo Riccati), architect (Francesco Maria Preti) and musician (Agostino Steffani) were born in Castelfranco. However, the city is mostly known for one of the most extraordinary and enigmatic painters: Giorgione.